A BIG BANG of Content: Sprint Vector Update 1.3 Now Live on All Platforms!

Oh, you thought that Sprint Vector couldn’t possibly get crazier, didn’t you? Hachi machi, aren’t you the absolute most!

In March’s Space Race Update, Mr. Entertainment surprised his contestants with an all-new course amid the glitz and glam (and gravity wells) of Outer Vegas, a luxury resort strategically positioned between two black holes where time stands still. But there’s no way you assumed he’d see those looming voids as just window dressing, right?

You’re about to find out, as the next stage of Sprint Vector heads into the heart of the neighboring Moebius 3-15 black hole itself! Yes, there’s a top secret research center nearby that’s probing into the singularity’s depths and has ruled it a no-fly zone..but who cares?! Who knows what weirdness awaits you on the other side? Think of the ratings! This is a map that’s truly worthy of its name: Cosmic Odyssey!

But that’s not all: two more contestants have thrown their cranial adornments into the Sprint Vector race in pursuit of their hearts’ desires, and their goals are lofty, to say the least:

You can check out their shiny final forms in the video above, but we always love sharing the concept art so you can see where it all started: 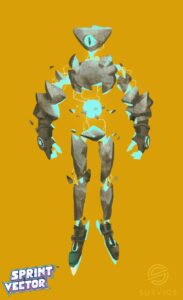 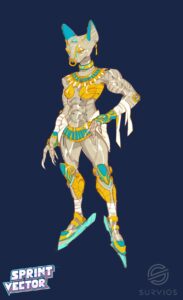 Additionally, the update includes a change that many players will be stoked to hear: a new leaderboard mode! With Sprint Vector increasingly gaining popularity as a VR speedrunner, we’re adding Pure Leaderboards for all maps, so players conducting solo runs without items and AI can compete against each other solely based on skill. To go along with the implementation of Pure Leaderboards, we’re conducting a complete wipe of all leaderboards. Now that the playing field is once again level, go forth and conquer!

The Sprint Vector Big Bang Update is available now on Steam, Oculus Home, and PlayStation Network, made possible by Intel; thanks to them, all existing Sprint Vector players receive this update completely free of charge.